The Epic of Gilgamesh: The Archetype of Ancient Flood Mythologies.

The ancient literature and religious traditions of the Greeks, Egyptians and Hebrews each contained mythologies of a great and catastrophic flood that nearly destroyed all of mankind.  One of the earliest written accounts originated in Mesopotamia, in what is commonly known as The Epic of Gilgamesh.  First recorded in the early to mid second millennium BCE, this ancient Mesopotamian flood myth was widely disseminated, emulated and modified throughout the ancient Mediterranean.

Map depicting region(s) commonly referred to as ‘The Fertile Crescent.’

The name Mesopotamia is derived from ancient Greek, and means the land between two rivers.  These two great rivers were the Tigris and Euphrates which formed the eastern portion of what archaeologists, anthropologist and historians commonly refer to as the Fertile Crescent.  By c. 3000 BCE, numerous city-states had formed and cuneiform writing had been established. By c. 2250 BCE, the Akkadian Empire had established its dominance in the region.  In the south, the native language of Sumerian was slowly replaced by Akkadian, which became the prevailing language of the region.  In c. 2154 BCE, an invasion by the Guti (a nomadic tribe) ended the power of Akkadian kingship.  This in turn allowed for the rise of the Assyrian Empire in the north- which included the powerful cities of Assur, Nineveh and Gasur (modern Nuzi), to eventually seize control of Akkad’s former holdings in the south.

By c. 1900 BCE, the military presence of the Assyrian Empire had withdrawn from the south which allowed for the establishment of the relatively short-lived dominion of the Babylonian Empire, famously ruled by the warrior-king, Hammurabi.  From c. 1700 BCE, the control of Babylon and other southern Mesopotamian cities would be seized by various foreign invaders: first by the Kassites, followed by the Elamites, only to be reconquered by a reinvigorated Assyrian Empire in c. 1225 BCE.  The rich history and archaeology of this region continues to fascinate people the world over and is the focus of intense study by numerous academic institutions.

Defining ‘who’ Gilgamesh was is a complex undertaking.  Gilgamesh, if he in fact existed,  is believed to have lived and ruled the city of Uruk at some point during the early to mid second millennium BCE.  While Gilgamesh is often assumed to have been a real (and historic) person, many archaeologists and historians remain unconvinced.  Nevertheless, The Epic of Gilgamesh is the oldest surviving literary work known to mankind.  First discovered in 1853 by Hormuzd Rassam, numerous copies of the text(s) have been unearthed since. Typically written (and transmitted) in cuneiform on twelve clay tablets (or cylinders), the epic relays the mythological quest(s) of the demigod Gilgamesh, not the least of which was his ultimately futile attempt to gain immortality.

Of particular interest to this discussion is a portion of the epic contained upon what is commonly referred to simply as Tablet 11 or the ‘Flood Tablet.’ The tablet gives no date or indication as to when the ‘The Great Flood’ supposedly took place other than a mysterious reference to a time before the reign of Gilgamesh.  Modern historians and archaeologists are very fortunate that numerous copies of this text were created in antiquity and have survived (in whole or in part) until today.   Putting the lack of a date aside, the Flood Tablet clearly establishes the existence of a ‘flood mythology’ within Mesopotamia, no later than 1800 BCE. 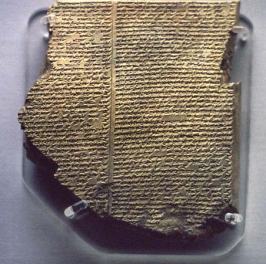 The Epic of Gilgamesh contains numerous references to early mythological beliefs.  But it is in the critical Flood Tablet that we can read about the growing anger of the gods of Mesopotamia towards the ‘babel’ (or murmuring) of men who had been created to toil the earth in servitude of the gods.  Following their creation, mankind had greatly multiplied across the face of the earth.  This babbling was incessant and annoyed the gods to the point of anger.  Thus, it was agreed to by all but one of the gods that for their collective wickedness, that mankind should be destroyed by a great flooding of the earth.  Torn between his love of mankind and his loyalty to the supreme god Anu and his brother-god Enlil, that Ea (also known as Enki) sent forth a messenger to warn the righteous Utnapishtim to build a boat so that he and his family might be spared from divine destruction.

“[in a dream Ea spoke to Utnapishtim] O’ man of Shurrupak, son of Ubara-Tutu; tear down your house [of reeds] and build a boat, abandon possessions and look for life, despise worldly goods and save your sole alive.  Tear down your house, I say, and build a boat.  These are the measurements of the barque as you shall build her: let hex beam equal her length, let her deck be roofed like the vault that covers the abyss; then take up into the boat the seed of all living creatures.”- Tablet 11

Obedient, Utnapishtim did as he was commanded.  The people (and elders) saw what he was doing and questioned Utnapishtim as to why he was building a boat.  Utnapishtim issued a warning to the people that the god Enlil was wrathful and wished to destroy all men with a mighty deluge of water which would cover the earth- killing all living creatures.  Apparently, Utnapishtim’s warnings went unheeded and he returned to his task.  The building of Utnapishtim’s boat was a monumental task, undertaken and completed in what can only be described as ‘miraculously short’ period of time.

[Utnapishtim speaking] “In the first light of dawn all my household gathered round me, the children brought pitch and the men whatever necessary.  On the fifth day I laid the keel and the ribs, then I made fast the planking.  The ground-space was one acre, each side of the deck measured one hundred and twenty cubits, making a square.  I built six decks below, seven in all, I divided them into nine sections with bulkheads between.  I drove in wedges where needed, I saw to the punt poles, and laid in the supplies.  The carriers brought oil in baskets,  I poured pitch into the furnace and asphalt and oil: more oil was consumed in caulking, and more again the master of the boat took into his stores.  I slaughtered the bullocks for the people and every day I killed sheep.  I gave the shipwrights wine to drink as though it were a river of water, raw wine and red wine and oil and white wine.  There was feasting then as- there is the New Year’s festival; I myself anointed my head.  On the seventh day the boat was complete.” – Tablet 11

“I loaded into her [the boat] all that I had of gold and of living things, my family, my kin, the beast of the field both wild and tame, and all the craftsmen. I sent them on board, for the time that Shamash had ordained was already fulfilled when he said, “in the evening, when the rider of the storm [Enlil] sends down the destroying rain, enter the boat and batten her down.”- Tablet 11

The epic continues and describes in detail the perilous voyage taken by Utnapishtim over the next ‘six days and six nights’ as the winds blew and the entire world was covered in waters coming from heaven and from the nether [sea].  With all of mankind thus destroyed, the storm subsided and Utnapishtim’s boat eventually came to rest at Mount Nisir (possibly Pir Omar Gudrun in Iraq).  Upon landing, Utnapishtim sent forth two doves which were unable to find dry land.  On the seventh day Utnapishtim sent forth a raven which discovered dry land.  In thanks, Utnapishtim made joyous offerings to the gods, who were pleased.  For his piety, Enlil granted Utnapishtim eternal life- that he would remain undying in a distant land, known as the mouth of the rivers.

With its numerous rivers and seasonal flooding it should come to no surprise that the point of origin for this mythological tradition would be ancient Mesopotamia.  While the mythology of ancient Egypt, Greece, and by later extension Rome, contained their own flood mythologies with several notable similarities, it is with the Abrahamic religions that those similarities give way to obvious emulation of this earlier Mesopotamian tradition. The Epic of Gilgamesh serves as a powerful example of the process of cultural diffusion in the ancient world.  Ancient peoples did not live in vacuums.  They traded with, warred with, conquered or where themselves conquered by foreign peoples with whom they exchanged ideas, traditions and mythologies.  While drawing a direct (point to point) connection between the flood mythology of Mesopotamia to Egypt and/or Greece would be difficult, its not impossible.  The same comparison between the Abrahamic myth of Noah (Nuh in Islam) is obvious.  To deny this causal link between the two mythologies is simply absurd.

Sadly, a more detailed discussion of this topic goes beyond the intended scope of this particular article and has been the subject of numerous academically critiqued texts on the subject.  I would encourage anyone seeking more information on either the mythology (religion) or history of Mesopotamia to do so only from credible sources.  Mesopotamia, as the originator of cities (urbanization), written language and numerous technical advancements truly deserves its title as the Cradle of Civilization- but perhaps this title should also acknowledge (or at least do so more often) the rich mythological and religious traditions which can be linked to it.

Patrick Lowinger holds a M.A. in Ancient and Classical History from American Military University (AMU) and B.S. in Microbiology (1993) from California State University, Long Beach.
View all posts by Patrick Lowinger →
This entry was posted in Uncategorized. Bookmark the permalink.

1 Response to The Epic of Gilgamesh: The Archetype of Ancient Flood Mythologies.